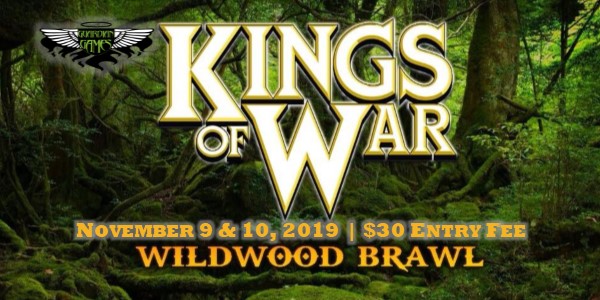 Online registration is closed for this event

During your match do not adjust terrain placement. Be mindful of your carrying cases or display boards shifting terrain. Please try and return the board to its original state after your match is finished. If you have any issues with the terrain, or believe it may have been moved feel free to speak to the TO or a designated Judge.

Matches will be timed with the rules outlines in the 2nd Edition Core 2018 Rulebook, each player will be allotted 65 minutes per match. A chess clock or cell phone app capable of tracking time is required. Players will roll for round seven as per normal if either player has time left on the clock.

Battle Score: There is a maximum of 109 points. Comprised of a 5/10/15 (lose/draw/win), positive attrition score modifications, and additional battle score points for bonus objectives (see tournament special rules below below).

Sportsmanship Points: There is a maximum of 25 sportsmanship points. After each round, your opponent will vote on the following:

Hobby Points: There is a maximum of 60 hobby points. Up to 50 points can be won through the hobby rubric (see link below) and an additional 0-10 points can be awarded by the paint judge. — https://www.dropbox.com/s/eiq1ty8bcwncxb0/HobbyRubricWildwood2018.odt?dl=0

Modeling Rules: All models must be accurately represented to what they are, to the best of the painter’s ability (no flying horses as chariots or a dragon as regular infantry). Armies which are heavily proxid should be run by the at least one week prior to the event for approval.

Special Scenarios: This event will be using scenarios chosen from the CoK2019 book, but each scenario will be accompanied by additional rules which are designed to add a new strategic element to the match. The special scenarios will all be released one month prior to the event.

Once Per Game Reroll: Each player will receive a once per game reroll of a single die. This can be used for any single die rolled by either player over the course of the game. This reroll cannot be used for any rolls which occurs before the first turn of the game, for the roll to determine round seven, or to reroll a die already rerolled by your opponent with this special rule.

Scoring: Individual matches will be scored on a Lose/Draw/Win (5/10/15) ratio and a Positive Attrition Score Modifier.

All rules will be taken from the Kings of War 2.0 & Core 2019 books. All units are made available for this event. In addition, any official FAQ rulings and errata from Mantic Games (published on the website or official forums) will also be used.

Please note that there is absolutely nothing wrong with asking an opponent if they can show you the appropriate rule or set of characteristics so that you can check for yourself that everything is being done correctly. All we require is that you ask nicely and politely, and that you do your best to sort out any problems yourselves. Please ask someone at the tables next to you before asking the TO. If in doubt, the organizers are available to resolve your problem. Please also respect the time each player has. If a question cannot be resolved quickly, please stop the clock until the answer or a solution is decided upon. Judges will be on hand if players require a ruling. Your judges for the event will be pointed out at the start of the day. A judge’s ruling is final.

Guardian Games, which rolled its first nat 20 in 2005, is the go-to gaming destination when in Oregon!